3, 2, 1... the European Apprentices Network has been officially launched! 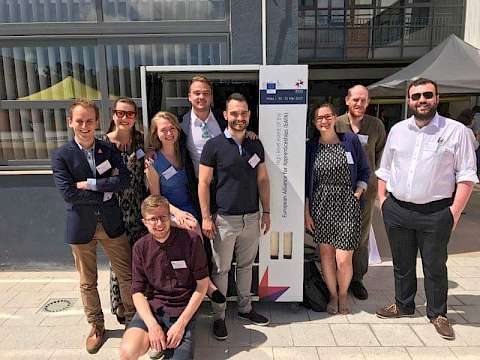 Between the 30th and 31st of May, OBESSU attended the High-Level Event of the European Alliance for Apprenticeships (EAfA) in Malta.

The Alliance is a platform gathering governments, regions, businesses, social partners, chambers, vocational education and training (VET) providers, NGOs and youth representatives. The main aim of the platform is to support different measures in order to foster the quality of apprenticeships in Europe.

The event focused mainly around what the Alliance did for the past four years since it was established in 2013 and what will be the future steps. In particularly, one of the highlights was the launch of the new European Apprentices Network (EAN)!

The European Apprentices Network was created by OBESSU in cooperation with the European Youth Forum (YFJ) and supported by the European Commission (EC). The idea was to create a European platform to represent apprentices, as this is a group of people who are only rarely represented. Right now the network consists of 9 people who come from Trade Union Youth departments, National Youth Departments, organisations representing apprentices and most importantly - apprentices themselves! More details about the Network can be found here.

During the event in Malta, the Network met to discuss its priorities for the next years and we came up with the following seven points:

Following an opening speech and an interactive session, these priorities were presented to the audience and, after a visual countdown, the European Apprentices Network was officially launched!

OBESSU and YFJ were both mentioned and thanked several times by representatives of the European Commission and even by the Commissioner herself, Marianne Thyssen, for setting up this Network.

The current structure will only be temporary, as we strive to create a sustainable network which can also help developing local, regional and national structures for representation.

The European Apprentices Network will meet again in October 2017 during the next meeting of EAfA, but in the meanwhile we promise that we’ll keep fighting for the rights of apprentices!