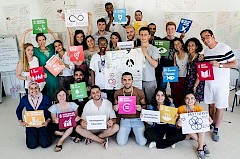 „In the past, I was thinking that I am a global citizen, but now I feel more global“ - participant from the MedUni

Marvin from our Pool of Trainers (PoT) participated in this year’s „Mediterranean University on Youth and Global Citizenship (MedUni)“ from 2 to 9 July organised by the North-South Centre of the Council of Europe (NSC) in co-operation with l’Observatoire National de la Jeunesse (ONJ) (Tunisia) and in partnership with other international youth-led and youth serving organisations from Europe and the Southern Mediterranean. Since 2013, the MedUni gathers representatives of youth organisations and youth movements to discuss, train and be trained around issues of democratic participation and global citizenship. The MedUni is the younger sister of the University on Youth and Development that takes place in Mollina, Spain, every year, in which framework OBESSU participates this year with its knowledge-sharing activity for Seeds for Integration projects.

More than 100 people from all over the world participated in this years MedUni in six different activities with topics from „No Hate Speech“ to „Structured Participation“. In Marvin’s training course on Global Education the participants were gathered in order to further develop their practices of Global Education and their understanding of intercultural education, intercultural learning and intercultural competences. Additionally the joint sessions of the MedUni provided a creative common space, that gave the participants the opportunity to network and reflect on their global identities.

Marvin’s 3 highlights of the MedUni:

1. „In my training course I learned much about the concept of Global Education. In one simulation we played cards with a group of people, but after the rules were explained to us, we weren't allowed to talk anymore. The winner of our group changed to another table and the winner of another group came to us. But at the other tables they played cards with different rules. At my table due to the cultural shock we just forced the winner from the other team to play by our rules without explaining them to him, but after the second shift we at least explained all the rules to our new player without words. This was an eye-opening activity!“

2. „One of the most inspiring moments of the MedUni was one of the joint sessions where seven participants from different parts of the world and with very different life experiences, shared their personal stories of global identity, activism, but also feelings of alienation. Through these TED-Talks the topics Global Citizenship, empowerment and participation that may seem very abstract came to live in a very personalized way.“ 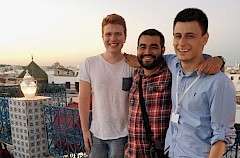 3. „The MedUni was a huge intercultural learning space. My two roommates were from Libya and Crimea (Ukraine) and we got along very well, although our lives are very different. Both of them fought in a war in their countries and I can't grasp at all, what kind of experience that has to be. I have the feeling that I don't had to fight for a single thing in my  very privileged  life. I somehow knew this on a theoretical level before too, but it became more real at the MedUni.“