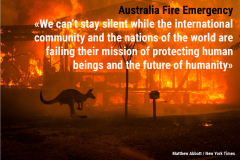 The people of Australia are currently facing the effects of the worst environmental crisis in modern history. A place well known for its abundant biodiversity has been engulfed in a cycle of wildfires and as a result, human lives and animal species are in grave danger.

As student organizations we acknowledge that the ravishing fires are also occurring on Indigenous lands where sovereignty has not been ceded. We stand in solidarity with the Indigenous people who have always been at the frontlines of protecting land and water, whose sacred lands are now being destroyed and whose livelihoods are deeply affected.

As students and learners from all across the world we are seriously alarmed by this situation whichdoesn’t have a concrete solution in sight, and we want to show our solidarity to the people in Australia.

We are concerned by the global causes of these phenomena, extreme weather, an implication of global warming. Climate change is already wracking havoc in the world, causing crises everywhere onour planet, and we can’t stay silent while the international community and the nations of the worldare failing their mission of protecting human beings and the future of humanity.

We are impressed by the strength of the recent student mobilisations in Australia in relation to the climate crisis, that occurred even earlier than the mainstream political debate. In diverse ways, we have taken action to upend climate change, with the Global Climate Strikes for Future and many other initiatives at the local level, making the environmental crisis a core point of the action of school and university student activists and unions.

We denounce the negligence of the international community, as this crisis is coming shortly after the failure of the UN Climate Change Conference in Madrid, at the end of 2019. The decisions of not acting on climate change will cause and aggravate tragedies such as this one. As representatives of the youngest generations we are left unimpressed by the politics focusing on the defence of short-time interests more than on the common goals of a sustainable development for humanity.

As organisations involved in the global student cooperation, and at work for a new Global Student Forum, we wish to express full solidarity to all learners, students, school-students, activists and Indigenous people of Australia. We offer ourselves to support in any possible way that could help alleviate this emergency status, even knowing that our impact on the short term cannot be decisive.

We would be really glad of having the opportunity of coordinating more our common fight for the environment and youth rights in the future.