Working Group on Curricula for the 21st Century: beginnings are not always that easy!

Monday, 03. October 2022
Working Group on Curricula for the 21st Century: beginnings are not always that easy! 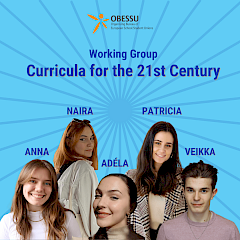 As you may know - and if you do not, please go back and read this - the members of the Working Group on curricula for the 21st century started their mandate in May 2022.

During these first months, they have been researching and gathering information about the current state of the curricula in different European countries. This has been an essential part in order to identify the shortcomings of the system.

Since it is materially impossible to deal with all areas of knowledge that are of interest to 21st-century students, the next step was to decide the topics the Working Group will be focusing on. After a few brainstorming sessions and even an Instagram campaign to collect students’ opinions, sex education, inclusivity and activism, mental health or decolonisation, were some of the ones chosen.

After that, an in-person meeting took place in Brussels on 24 and 25th October in which new strategies to reach students’ opinions were discussed. In this regard, three focus groups on different topics are going to be held in the following weeks in order to collect students’ opinions. We would like to encourage you all to take part in them since the more diverse they are, the better! Also, the working group was working on the structure that the final policy paper will have and they planned the next months so that all the work could be efficiently done within the different deadlines.

It cannot be overlooked that the aim of this group is to draft a policy paper stating what 21st-century students are concerned about and, hence, want to be included in their Education. Consequently, OBESSU Member Organisations play a fundamental role in this final goal. So, do not hesitate to get in touch with the WG by sending them an email to wgcurricula@obessu.org! Any proposal, suggestion or even information about the curricula in your country will be welcomed.